Scientists and psychologist largely agree that it is possible to become dependent on marijuana. It also seems true that the adverse physical, mental, emotional and economic effects of the problem are less pronounced than those from other forms of chemical dependency such as alcoholism or cocaine abuse or narcotic addiction. Regardless, people can use marijuana to the point where they feel they cannot function without having the drug in their system. This becomes problematic when the sedating and emotion-numbing effects of marijuana make it difficult for heavy users to perform at work or maintain functional relationships with friends and family members.

If you have reached that stage with your own marijuana use, evidence shows that various forms of counseling could help you quit pot and develop other ways besides getting high to cope with strong feelings or difficult situations. 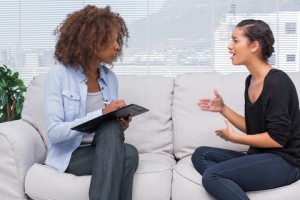 Counseling can help you heal from the effects of marijuana abuse and addiction.

Maybe because marijuana addiction is discounted as a significant problem or because it presents unique challenges to overcome, dedicated Marijuana Anonymous groups exist in may localities throughout the United States. MA follows the same 12-step program as Alcoholics Anonymous and Narcotics Anonymous. The effectiveness of those more-established self-help groups has been studied repeatedly, with most researchers coming to the conclusion that long-term participation helps addicts achieve and maintain sobriety. A good summary of the research up until the end of the last decade appears in the December 2010 issue of Alcoholism Treatment Quarterly.

Counseling Can Change Your Attitude Toward Marijuana Use

The National Institute on Drug Abuse (NIDA) highlights motivation enhancement therapy, or MET, as one of the most effective forms of clinical counseling for overcoming marijuana addiction. An institute factsheet explains that with MET, a mental health professional conducts a series of structured interviews with the person wanting to recover. During those sessions, the questions and answers reveal the addict’s reasons for wanting to quit, the goals for recovery and what personal resources the addict can rely upon to prevent relapses.

Counseling Can Change Your Behavior Around Marijuana

NIDA also presents evidence for the effectiveness of a more in-depth form of professional counseling called cognitive-behavioral therapy. CBT, as it is commonly known, helps addicts recognize feelings and situations that put them at risk for using drugs. The counseling method also guides addicts toward formulating and implementing strategies for dealing with negative emotions and avoiding situations that threaten their sobriety.

In summary, several types of effective counseling are available to help you overcome marijuana addiction. Accessing more than one of those resources can be particularly beneficial.