Marijuana is one of the most widely used illicit drugs in the United States. The debate for legalization-whether for medicinal or recreational use-is never ending. Its effects on a person’s overall health is studied more than ever before. The marijuana health effects-while not as damaging as other illicit drugs- still pose a threat to a user’s overall well-being. The more educated a person becomes about marijuana, the clearer it will become to them that marijuana use can indeed have a negative impact on their life.

According to the National Institute on Drug Abuse, marijuana users who have taken large doses of the drug may experience an acute psychosis, which includes hallucinations, delusions, and a loss of the sense of personal identity.

What are Some Alarming Marijuana Health Effects Known?

If you or a loved one regularly smoke or use marijuana in any other way, then knowing how it can negatively affect your health both physically and psychologically is important. Some people think that using marijuana is not harmful at all. Still others have reported certain unpleasant effects while high on the substance. Many report that some of the effects remain even after the high is gone. Here are 5 known effects caused from using marijuana: 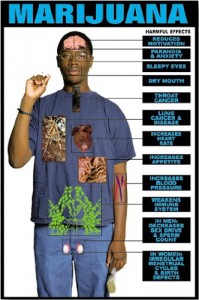 Marijuana can have serious long-term impacts on a person’s physical health.

While the effects of marijuana use may affect users in different ways, the more it is used long-term, the more serious the health complications can become, and may pose serious danger to a user’s overall well-being, both psychologically and physically.

Getting Help with Marijuana Dependence

If you or someone you love is concerned about the negative marijuana health effects mentioned above, and have been trying to quit, it is recommended to seek professional help by contacting a substance abuse specialist. These licensed specialists can provide you or a loved one with resources and information to take control and safely stop using marijuana.