Could My Son Have Marijuana Addiction?

Many parents become concerned when they believe their children are abusing marijuana. In many cases, a young person is just using it recreationally without a strong need for or addiction to the drug. However, there is a chance of addiction for someone who practices heavy marijuana abuse. If you are concerned that your son may be addicted to marijuana, consider these signs.

Does Your Son Use Marijuana in Large Amounts?

The NLM states that “some people get addicted to marijuana after using it for a while.” This can occur and is usually the concern of most parents if they believe their son is smoking marijuana. However, addiction “is more likely to happen” to those who “use marijuana every day.” This means that someone who smokes chronically is at a higher risk for addiction. If your son:

Does Your Son’s Behavior Follow the Pattern of Addiction? 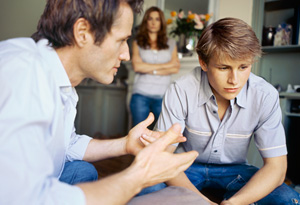 If you’re worried about your son’s marijuana use it is important that you communicate about it.

If your son experiences certain physical effects, he is most likely addicted to marijuana. Those are:

If you notice your son’s behavior changing, it may be a sign of marijuana addiction. Possible behavioral signs are:

The Issue With Teenagers and Marijuana Addiction

Make sure you talk to your son about his marijuana use. He should know the possible effects the drug can have and may not be aware of them. Discussing it with him can do a lot to prevent addiction. And if your son is already addicted, make sure to seek treatment for him.